Oberlin Club of Washington, DC: OUT TO VOTE: A Story of Redemption. A Story of Democracy. 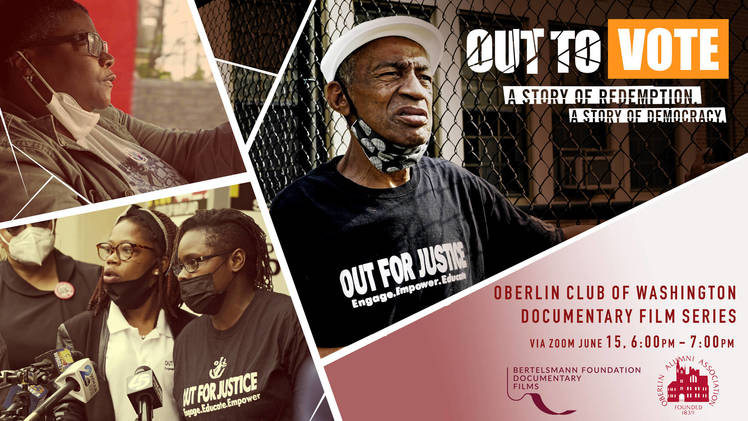 After 37 years in prison, Bobby Perkins can hardly believe that he has become a community leader, engaging marginalized citizens on democracy. Moreover, he has found meaning in the process. “That’s why I go out here to pound these sidewalks to register people to vote,” he explains between puffs of a Newport cigarette. “Because I believe in it. I believe in the democracy.”

Follow along in the run-up to the 2020 election as formerly incarcerated citizens, now community leaders Bobby Perkins, Nicole Hanson-Mundell and Monica Cooper go all-in to get out the vote in Baltimore, Maryland. Their efforts in the face of misinformation, polarization, and a global pandemic, are featured in this new Bertelsmann Foundation documentary. Theirs is a story of the powerful positive impact of democratic engagement.

THE PANEL WILL INCLUDE:

Samuel George ’07, the Bertelsmann Foundation’s Global Markets and Digital Advisor. Since joining Bertelsmann Foundation in 2012, his work has focused on economics, politics, the digital revolution, and daily life with a specific emphasis on where these issues intersect. His multimedia approach features documentary film, animated video, and written analysis. Samuel’s documentaries bring viewers up close and personal to people and communities facing the challenges and opportunities of the 21st century, offering candid perspectives that allow viewers to draw their own conclusions. George is currently completing a PhD at the Johns Hopkins University School of Advanced International Studies.

Dana Paikowsky ’13, a nationally recognized expert on incarcerated voting. She is an Equal Justice Works Fellow at the Campaign Legal Center, a nonprofit, nonpartisan organization dedicated to advancing democracy through law, and fighting for every American’s right to participate in the democratic process. Her fellowship focuses on removing barriers to the ballot box for incarcerated eligible voters. She works to combat jail-based disenfranchisement across the country using a diversity of tactics, including direct outreach strategies, policy advocacy, oversight, and litigation. Dana earned a B.A. from Oberlin College and a J.D. from Harvard Law School.

Monica Cooper, Executive Director, Maryland Justice Project. Monica Cooper is an advocate, activist, and freedom fighter. She is the Co-founder of the Maryland Justice Project and the former Executive Director of Out for Justice. In addition, she leads the Baltimore Affiliate of the National Council of Incarcerated and Formerly Incarcerated Women and Girls, which boasts membership from more than 30 states.

This program inaugurates the Oberlin Club of Washington, D.C. Film Series. The series will feature documentaries that are made by Obies or deemed to be of specific interest to the Oberlin community. Samuel George is the lead for this initiative.